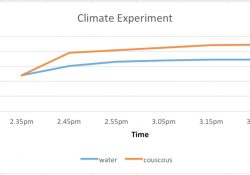 In Science last week, we investigated the influence that Oceans have on climate.

Using Google Maps, we researched the distances between towns (that shared approximately the same latitude) and the ocean.

Congratulations to Holly for her outstanding Scratch project, titled Blue Lake, which won first place in the recent Limestone Coast Scratch competition. Scratch is a programming language that allows its users to create games, animations and interactives stories. Scratch is also an online platform where users can share and “look inside” one another’s projects,  easily learning from each other. There are more than 6 million shared Scratch projects on the Scratch website!

Holly spent many hours designing a complex Scratch project that featured the Blue Lake (one of the competition’s requirements). One of Holly’s mini-games works similarly to a Wii game, with the program recognising motion from the player (through the webcam), and responding to this motion. Holly was careful to include media in her project that she had created herself, for example she used some music composed on the app Garage Band. Well done for respecting copyright, Holly!

You can check out Holly’s brilliant project below:

On the 23 of May the UP class went to the Leonardo Da Vinci exhibition. We learnt how things worked and what they did. We had to find machines that use gravity, reduce gravity, use friction and reduce friction. We also had to find our favourite machine and describe what forces that machine uses.

Below you can find some presentations from the students in our class.